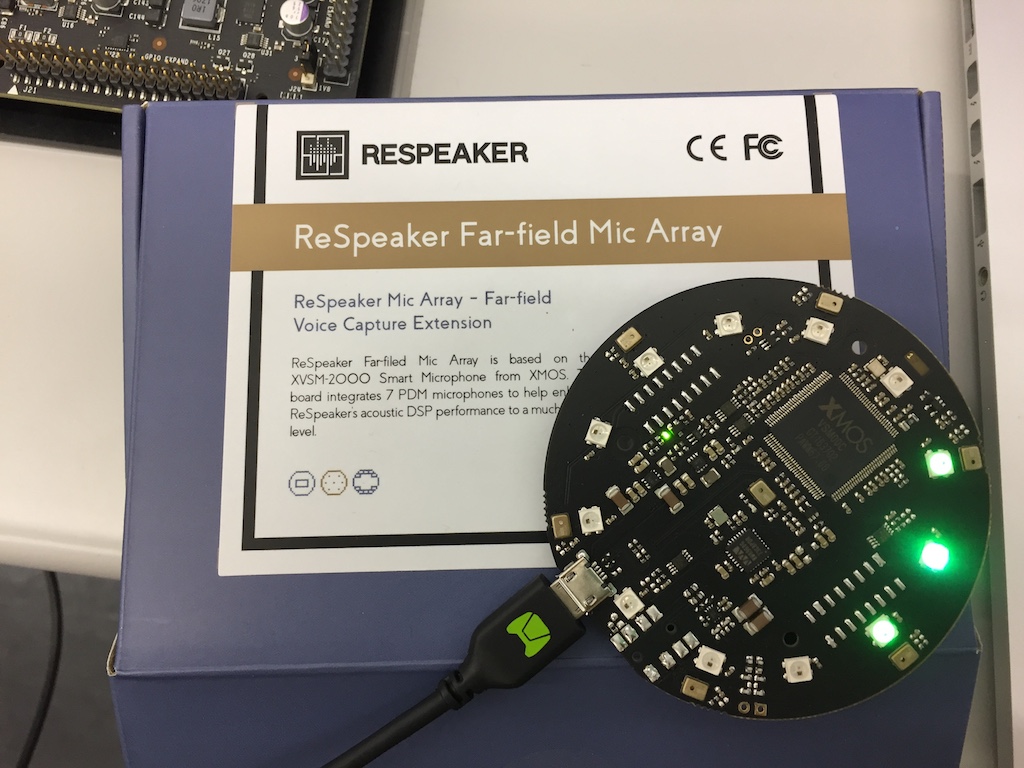 Since smart speakers like a google home or amazon alexa become popular, I try the Respeaker, which is smart speaker we can DIY. We can buy it from Seedstudio, and in my case, the product are delivered about 1 week from order.

The reason why I bought only mic array is I am interested in multi channel audio recording. Also, software which included in Respeaker Core are almost all open-source, and we can use it in a computer like a Raspberry Pi through USB cable.

There are some relevant products, so if you are interested in it, you may buy it. In addition, Respeaker Core is going to update to Version 2, so you may wait it.

So, I start to play some software from official github.

First, I install respeaker_python_library to Raspberry Pi3 and play it. My environments are below.

Basically, I follow the README.md in repository, however, I need to install additional dependencies.

Install the libraries by using apt and pip. Also, to use pyaudio, I download, build, and install portaudio.

Everything is ready, then run. Note that we can install this library by sudo pip install respeaker, but I clone to the working directory.

In initial state, the program react to words: “respeaker”, “alexa” and “play music”. We can find this configuration in respeaker_python_library/respeaker/pocketsphinx-data/.

Next, I try this repository, which is utilities for Respeaker Microphone Array. From README, this repository provides codes like DOA(Direction of Arrival), VAD(VoiceActivity Detection), KWS(Keyword Spotting or Keyword Search).

And from Requirements, I need to change the firmware of mic array to get the 8ch raw audio.

Therefore, I use this and update the firmware by the following commands.

After finishing, I cloned repository and run programs by following instructions in Readme. Because dependent libraries are already installed, I did not need to install additional libraries.

Finally, I record 8ch audio by using arecord. First, if you did not update the firmware mentioned above, you need to do it. Then, configure a mic array device in host computer.

In this case, because card is 1 and device is 0, I can record by the following command.

You can confirm the audio waves by a software like a audacity, and you can see there are some differences between channels.